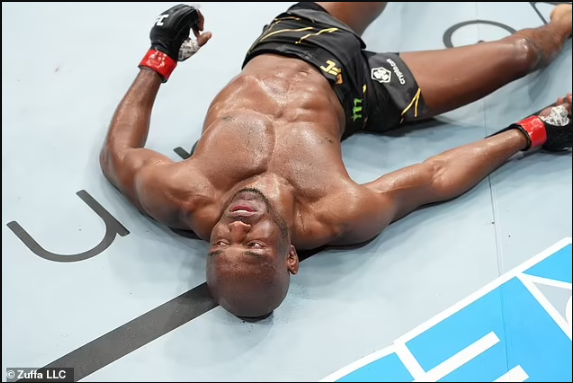 Kamaru Usman has spoken out on his KO defeat to Leon Edwards at UFC 278, admitting that his opponent ‘gave me a 20-minute nap’. Usman suffered a shocking head kick by Edwards and was left on the canvas as he lost his place at the top of the 170-pound division.  Usman, who previously beat Edwards in December 2015, added that he was hugely frustrated at giving up a takedown. ‘In the first round, the fight is going on and boom, that situation happens,’ Usman said. ‘He hooked my leg, and this is my bad knee — both of them aren’t the greatest — so I’m like, OK let me hip him through. I tried to hip him through but he had great position, kudos to him, and I get taken down. That I was probably more upset about, giving up that takedown. I was like, ‘F***! I gave up a takedown.’ 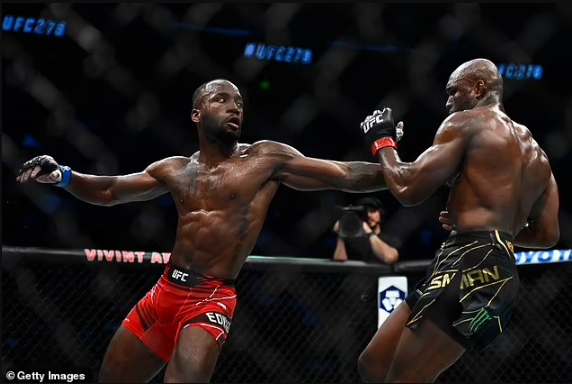 ‘So we get down and he takes the back and I’m just chilling and waiting for the bell and the bell goes off and I get up — and I didn’t realize this until I watched the fight back over — I get up and I kind of smiled. I get up and I jog back to my corner, but I look at it and I’m like, OK, I know that’s where I was at at that time. I was in that zone to where I’m unbothered by whatever is happening. I’m going to make this be whatever I want it to be.’ Usman had a clear plan for his clash with Edwards but he was unable to execute the plan before his defeat.  He said: ‘What I wanted to do was set him up and I was going to throw the punches that he couldn’t see and I wanted to sit him down and get him out of there,’ Usman said. ‘I wanted to throw with conviction like I did with [Jorge] Masvidal and get him out of there. What I’m going to do is shake left, shake right and then I’m going to let it go, but I’ve got to get him moving first, and I didn’t do a great job of that. ‘I’m moving, moving, OK, I’ve got him set up, which I really didn’t. I shake left, I shake right, and I’m sitting in an ambulance and they’re asking me, ‘Do you know where you’re at?’ I’m like, ‘What the f***?’.’ Usman is now focusing on a trilogy with Edwards, with Dana White keen for the fight to take place at Wembley Stadium.The post ‘Leon gave me a 20-minute nap’ – Kamaru Usman details immediate aftermath of UFC 278 knockout defeat by British star Leon Edwards appeared first on Linda Ikeji Blog.
Uncategorized