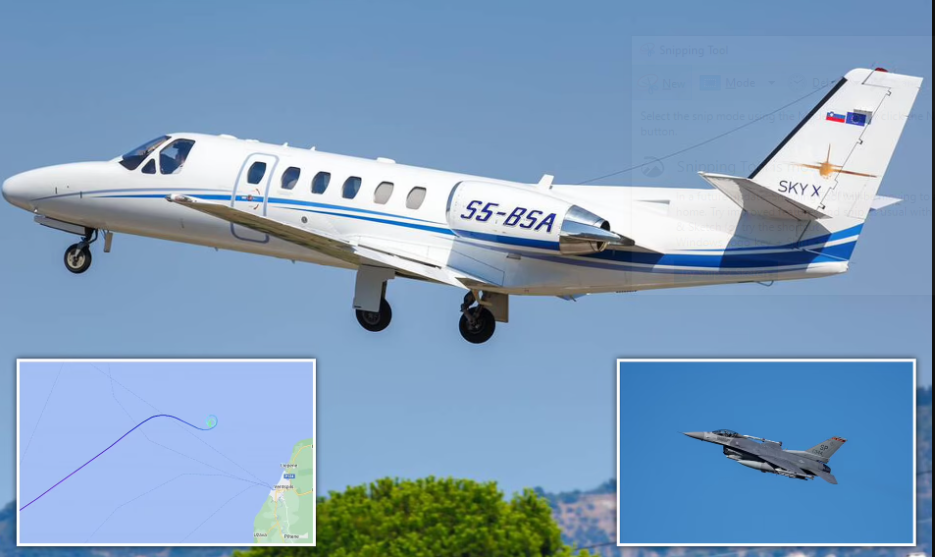 Four passengers are feared dead after a private Cessna plane crashed off the coast of Latvia, Sweden’s rescue service has said.  The aircraft, registered in Austria, was en route to Cologne, in Germany, on Sunday, September 4.  German newspaper Bild reported that the plane was carrying the pilot, a man, a woman and a person it described as a daughter, without sourcing the information. The Austrian-registered Cessna 551 aircraft was flying from Jerez in southern Spain, from where it took off at 12.56pm GMT (1.56pm in the UK), according to FlightRadar24 website. Swedish and German media reports say the flight was initially heading from Spain to Germany. The plane turned twice, at Paris and Cologne, before heading straight out over the Baltic, passing near the Swedish island of Gotland. At 5.37pm GMT (6.37pm in the UK) it was listed on the flight tracker as rapidly losing speed and altitude. “We’ve learned that the plane has crashed (in the ocean) north-west of the town of Ventspils in Latvia,” a spokesperson for Sweden’s rescue service said. “It has disappeared from the radar.” Bild said that the plane had reported shortly after takeoff that there was a problem with pressurisation in the cabin. But authorities lost radio contact with the aircraft soon after, and Spanish and French fighter jets were dispatched to intercept the plane. Latvian and Swedish rescue and coast guard vessels were patrolling the crash site and a nearby passenger ferry was alerted to help in the efforts. Debris from the plane and an oil spill have been found at the site, Swedish media reports said. German and Danish war planes had earlier been sent to inspect the aircraft as it passed through those countries’ airspace, but were unable to make contact, Johan Wahlstrom of the Swedish Maritime Administration said. “They could not see anyone in the cockpit,” he said. A Lithuanian air force helicopter was dispatched to the crash site for search and rescue at neighbouring Latvia’s request, a Lithuanian air force spokesperson said. Latvia said it had sent ships to the scene. “Our ships are on the way to the position where the plane crash happened,” said Liva Veita, spokesperson of the Latvian Navy.The post Four feared dead after private jet carrying family of three crashes into Baltic Sea appeared first on Linda Ikeji Blog.
Uncategorized