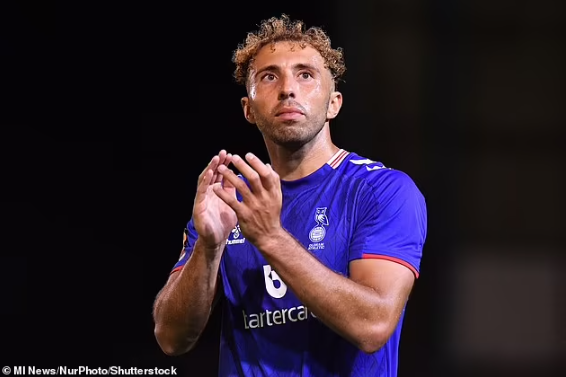 Police are investigating a car park ‘vicious assault’ that left an Oldham Athletic opponent hospitalised with serious injuries.  Earlier today, Oldham released a statement which said that their striker, ex-Everton academy product Hallam Hope, was attacked on the staff car park following the match between the two Vanarama League sides on Saturday afternoon.  The club added that the player, 28, sustained ‘serious injuries’ and would be ‘out of action for some weeks’.  Oldham said the matter had been reported to the police and added that they had provided CCTV footage in relation to the incident.  A Chesterfield player has been alleged as Hope’s attacker, and police have launched a probe into the matter.  A statement released by Chesterfield read: ‘Following an incident which took place following Saturday’s game at Oldham Athletic, we are aware of an allegation relating to an un-named Chesterfield player. ‘We are assisting Greater Manchester Police with their enquiries. As this is an ongoing investigation, no further comment will be made at this stage.’ A Greater Manchester Police spokesperson said: ‘At around 1.50pm on Sunday 4 September 2022, we received a report of an assault at Boundary Park on Saturday 3rd. ‘An investigation is underway.’ An Oldham statement read: ‘Oldham Athletic is sorry to have to report that our player, Hallam Hope, was the victim of a vicious assault on Saturday evening.  ‘The assault took place in the staff car park following the game against Chesterfield. Hallam sustained serious injuries which required hospital treatment and he will be out of action for some weeks.  ‘The matter has been reported to the Police and we have provided CCTV footage in relation to the incident.  ‘Whilst the investigation is continuing Oldham Athletic will make no further comment on the incident.  ‘The club is supporting Hallam and will continue to do so. We wish him a speedy recovery from a dreadful experience.’  Chesterfield won the fixture 2-0.The post Footballer Hallam Hope hospitalised after ‘vicious assault’ by another ”player” in car park after a match appeared first on Linda Ikeji Blog.
Uncategorized