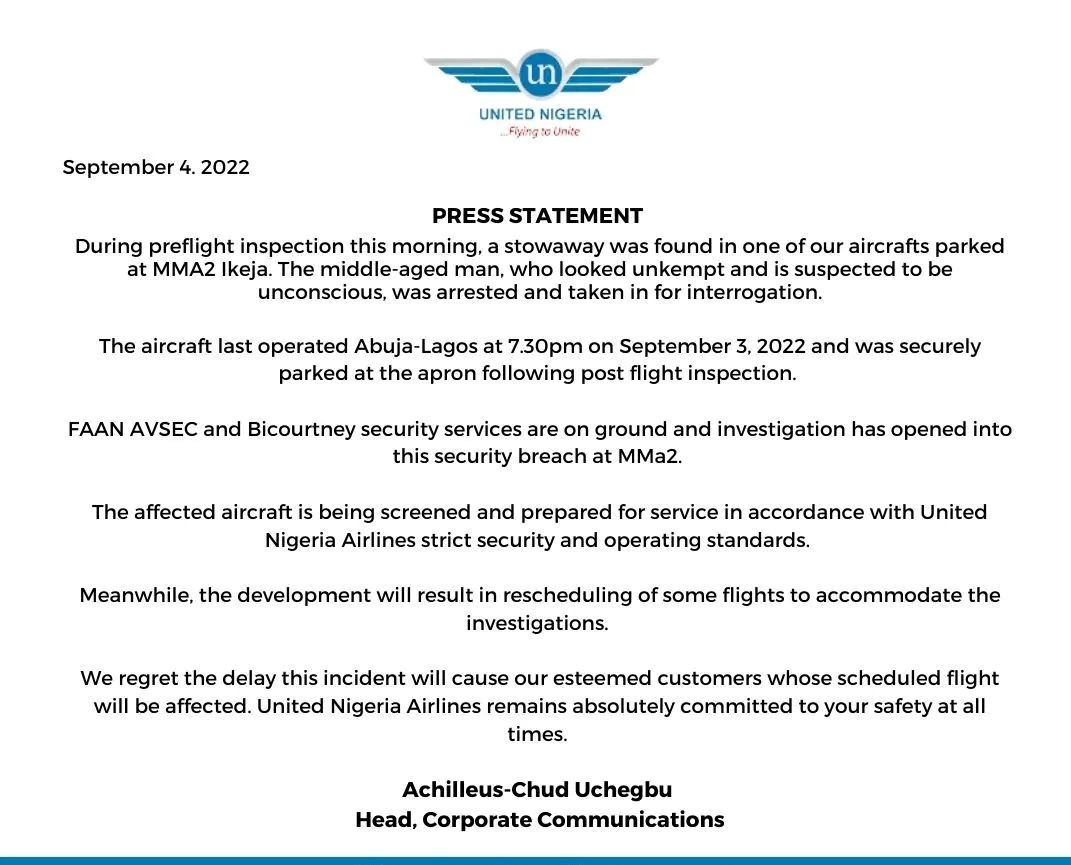 A suspected stowaway has been arrested at the Murtala Muhammed International Airport, Lagos. The middle-aged man was found in one of the aircraft belonging to United Nigeria Airlines which was parked at the MMA domestic terminal two on Sunday morning, September 4, 2022.  Head, Corporate Communications of the airline, Achilleus-Chud Uchegbu, who confirmed the incident in a statement said the suspect looked “unkempt and unconscious,”  Uchegbu said the suspect was discovered during the pre-flight inspection in the morning, adding that he had been handed over to the security agencies, saying the aviation security (AVSEC) personnel of the Federal Airports Authority of Nigeria (FAAN). He added that the aircraft last operated Abuja-Lagos at 7.30pm on September 3, 2022 and was securely parked at the apron following post flight inspection. “During preflight inspection this morning, a stowaway was found in one of our aircraft parked at MMA2 Ikeja,” the statement read.  “The middle-aged man, who looked unkempt and is suspected to be unconscious, was arrested and taken in for interrogation,” “FAAN, AVSEC and  Bicourtney security services are on the ground and investigation has opened into this security breach at MMA2 “The affected aircraft is being screened and  prepared for service in accordance with United Nigeria Airlines strict security and operating standards “Meanwhile, the development will result in rescheduling of some flights to  accommodate the investigations “We regret the delay this incident will  cause our esteemed customers whose scheduled  flight  will  be  affected. United Nigeria Airlines remains absolutely committed to your safety at all times.” The post Suspected stowaway discovered in parked aircraft at Lagos airport appeared first on Linda Ikeji Blog.
Uncategorized