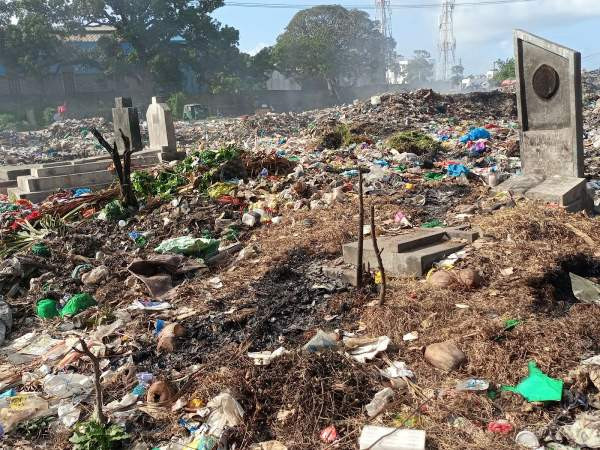 Mombasa County government has been called out for “violating rights of the dead” by approving the construction of a World Bank-funded public toilet on a graveyard. Haki Yetu Organization alleged that the Governor Hassan Joho-led administration allowed developers to encroach on a public cemetery at Makuti area in Kongowea Nyali Sub County where they flattened graves and exhumed bodies to pave way for the construction of a public toilet. It was gathered that under the slogan “the dead have rights too” the organization under the leadership of its Lands Programme Officer Munira Ali Omar, led residents in protest against the encroachment arguing that “disinterment for the purpose of constructing toilets is a show of disrespect to the memory of the dead and their kinsmen”.  Omar who is also an advocate of the High Court, said the cemetery which serves the public in Kongowea, Nyali and other parts of Mombasa has also been converted into a dumping site and can no longer be used for its intended purpose, to bury the dead. She said the organisation had earlier written to the county government through the Department of Lands, Planning, and Housing, as well as to the National Land Commission (NLC) requesting information on the project within seven days which lapsed on August 29. While the outgoing Joho’s administration chose to remain silent over the matter according to Omar, in a written response seen by K24 Digital, the NLC through County Lands Coordinator Edward Bosire stated that the development was not brought to the commission’s attention and therefore NLC takes great exception from the undertaking of the said project. “An advisory is hereby entered that the County Government should follow due process in any development so far envisaged on Public Land,” stated Bosire in his response copied to NLC Chairman and four commissioners. According to Haki Yetu, the move to exhume the buried was unlawful and therefore the new Mombasa leadership should immediately halt the ongoing construction of the toilets within seven days. “Haki Yetu, the community of Kongowea together with religious institutions condemns the action of the county government of constructing toilets on a public cemetery on the following grounds. The law protects the sanctity of the buried which is not to be disinterred unless through a court order under extenuating circumstances. “Construction of toilets for the public as part of corporate social responsibility (CSR) on a public cemetery knowing its impacts, not just to the beloved dead but also to the World Bank which has standards and policies when implementing their projects?” Posed Munira in a statement.The post Mombasa county called out for building public toilet on graveyard appeared first on Linda Ikeji Blog.
Uncategorized