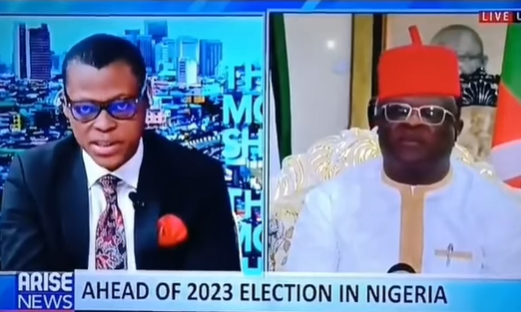 Gov Dave Umahi of Ebonyi state was on AriseTV this morning for an interview. He seized the opportunity to mock one of the anchors, Rufai Oseni, who last month had a running with officers of the Lagos State police command , after he drove on the dedicated lane for BRT buses. During the interview, Rufai had asked Gov Umahi his thoughts on the Muslim-Muslim ticket fielded by his party, APC. He asked Umahi who he described as a ‘born again’ Christian to defend the Muslim-Muslim ticket. Umahi responded saying;”Rufai I think I have answered this question before and I don’t know whether the fact that you broke the law of driving against traffic is a problem…I have never commented about that. You have not apologised to me” Watch a video below…      View this post on Instagram           A post shared by Lindaikejiblog (@lindaikejiblogofficial)  The post Gov Umahi mocks Rufai Oseni over his traffic offence after the Arise TV host asked him to defend APC’s Muslim-Muslim ticket (video) appeared first on Linda Ikeji Blog.
Uncategorized