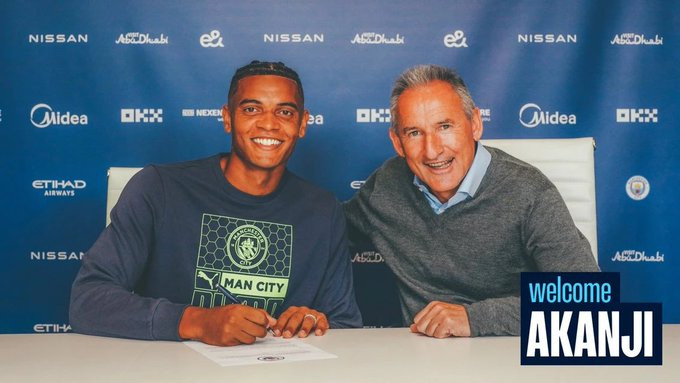 Manchester City football club of England have completed the signing of Swiss- Nigerian player Manuel Obafemi  Akanji from Borussia Dortmund.The centre-back had failed to make an appearance for Dortmund this season before joining City and was into the final year of his contract but has now signed a five year deal with City. Akanji, 27 told the club website on Thursday, September 1: “I am delighted to be here and can’t wait to get started.“City have been one of the best teams in Europe over the last few seasons. They are brilliant to watch, play an exciting brand of football and compete for trophies year in, year out, so coming here feels like the perfect next step in my career.“Pep Guardiola is an exceptional manager and this is an exceptional squad of players, so this is an exciting opportunity for me.“I am really looking forward to testing myself in the Premier League and I will do everything I can to help this Club be successful.”City have four senior centre-backs in their squad already, but Aymeric Laporte has yet to make an appearance this season due to injury. Ruben Dias, John Stones and Nathan Ake have been used by Guardiola so far in 2022-23.Akanji joined Dortmund from Basel in 2018 and had been a first-team regular since his arrival. He made 36 appearances in all competitions last season.Akanji becomes City’s fifth summer signing, following Kalvin Phillips, Stefan Ortega, Sergio Gomez and Erling Haaland. Welcome, Akanji! pic.twitter.com/5kzmBMAPEj— Manchester City (@ManCity) September 1, 2022The post Manchester City complete signing of Manuel Obafemi Akanji from Borussia Dortmund appeared first on Linda Ikeji Blog.
Uncategorized