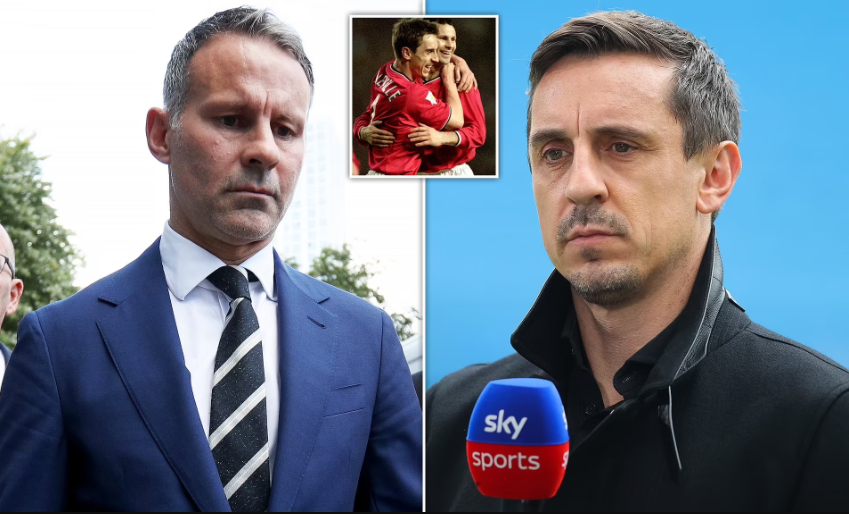 Gary Neville is reportedly facing a contempt of court action over a comment he made during his friend Ryan Giggs’ domestic violence trial. According to Mail Online, the former England star and Sky Sports pundit has been referred to Attorney General Suella Braverman by Judge Hilary Manley over a remark seen as referring to Giggs’ trial – though it is understood Neville, 47, has insisted he was speaking about the directors of their former club, Manchester United. The jury was told at the start of the case that Neville – Giggs’ business partner and a fellow member of United’s all-conquering ‘Class of 92′ team – could feature in the case. The message was raised in court in the absence of the jury as Giggs’ PR executive former girlfriend Kate Greville, 38, was being cross-examined. Peter Wright QC, prosecuting, said comments ‘by a member of the public who has a direct connection with this case’ had been brought to his attention, adding: ‘This may be a matter that requires immediate action so far as that individual is concerned.’ The trial was halted for 50 minutes while lawyers discussed the potential impact of the message with Judge Manley – who yesterday said she had referred Neville to the Attorney General. Returning to court, she said she had brought the matter to the attention of the presiding, or more senior judge, in the region, adding: ‘No doubt certain steps will be taken.’ Judge Manley ordered the trial to continue as she said there was no suggestion the jury had seen the comments. Earlier, she had warned the jury not be influenced by news reports they may see and guard against emotion, to ensure their verdicts are influenced only by the evidence heard in court – and nothing else. Chris Daw QC, defending Giggs, said he wanted to make it ‘crystal clear’ the footballer had nothing to do with the comment. Sky Sports pundit Neville, who employed Ms Greville in the hospitality business he ran with Giggs, was never in fact called as a witness. Contempt of court is an offence punishable by a fine or up to two years in prison. This includes publishing information that creates a ‘substantial risk’ of serious prejudice to a trial, according to the Attorney General’s Office. The act applies to newspapers, TV, radio and social media.  Neville has strenuously denied that any comments he made referred to the court case. Neville’s agent Di Law told MailOnline: ‘Gary is absolutely adamant that this was not about the case, but was referring to the Glazers [Manchester United’s US owners]. Any suggestion otherwise is not true and he will take it very seriously.’ Giggs, 48, had been on trial for four weeks accused of ‘coercively controlling’ Ms Greville over a three-year period before headbutting her during a drunken row at his £1.7million home. But after more than 20 hours of deliberations, the jury of seven women and four men, having lost one juror to illness, failed to reach any verdicts. Lawyers will now have to consider the public interest of a retrial but any further trial would only take place many months from now. Giggs was accused of bombarding her with abusive and sometimes foul-mouthed messages; threatening to send emails to her employers about their sex life; throwing her out of their home and hotel rooms when she questioned him about relationships with other women and ‘stalking’ her when they split by turning up at her work, home and gym to win back her affections. When the PR executive finally confronted him about his infidelity and accused him of sleeping with eight other women behind her back, on November 1, 2020, Giggs allegedly headbutted her during an argument at his mansion in Worsley, Greater Manchester. He was also accused of assaulting her sister Emma, 26, who was at the property looking after the couple’s new cocker spaniel puppy, Mac.The post Gary Neville faces contempt of court action over comment made during ex-Man Utd teammate Ryan Giggs’ domestic violence trial appeared first on Linda Ikeji Blog.
Uncategorized