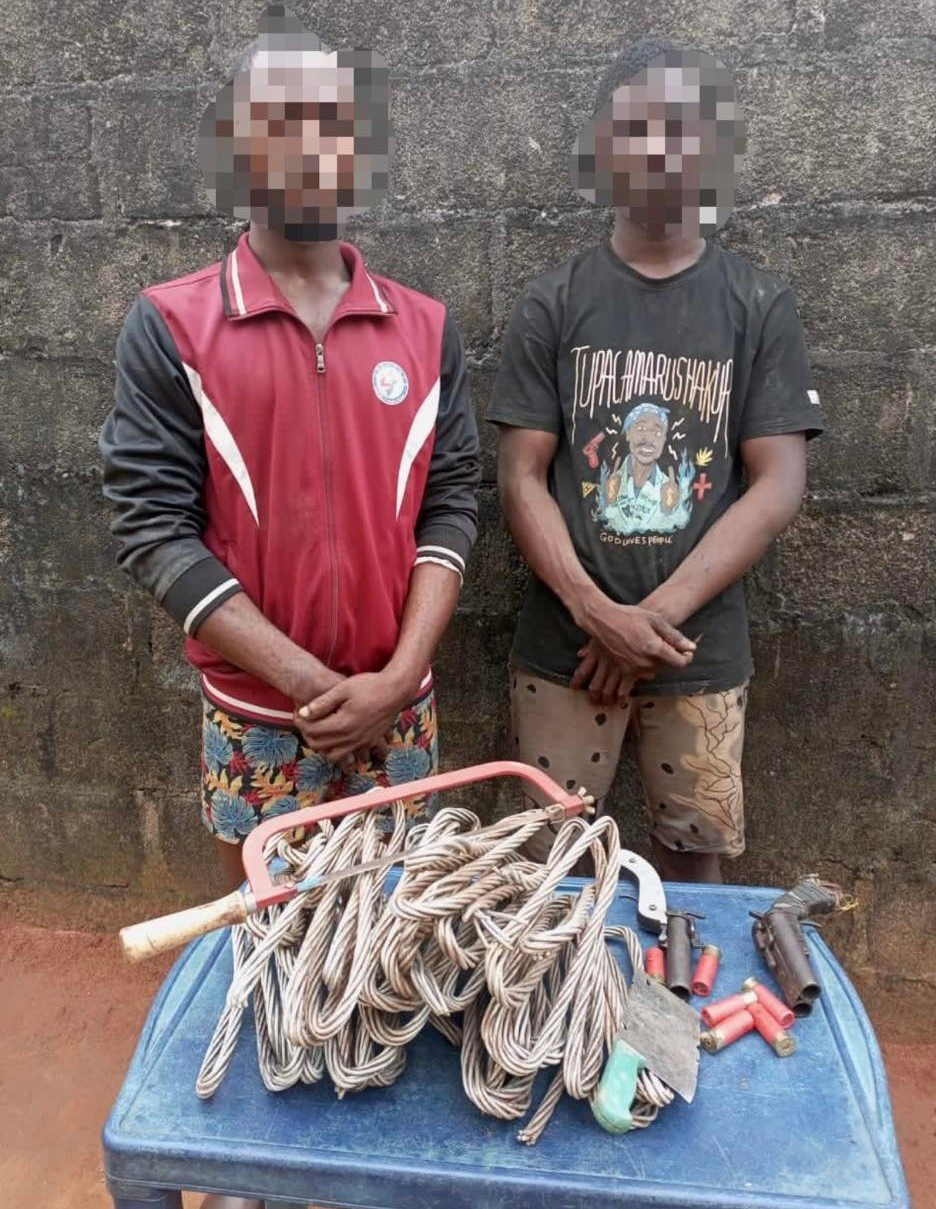 The Imo State Police Command has arrested two suspected serial vandals at Ugiri community in Isiala Mbano Local Government Area of the State. Spokesperson of the command, CSP Mchael Abattam, who disclosed this in a statement on Wednesday, August 31, said the suspects, John Johnson and Ekene Nwaojiji were arrested in connection with the vandalisation of EEDC electrical cables in the community.  “Sequel to constant vandalisation of EEDC electrical cables at Ugiri in Isiala Mbano Local Government Area of Imo State, resulting to continuous blackout in the community, the Command’s Tactical Teams had to carry out discreet investigation to unravel the perpetrators of this dastardly act,” the statement read.  “On 28/8/2022 at about 1130 hours, after gathering credible information, the police operatives, supported by the community vigilante group, arrested one John Johnson ‘m’ aged 24 years and Ekene Nwaojiji ‘m’ aged 21 years, both natives Nde Achi Ebonyi Local Government Area of Ebonyi State and recovered one locally made double barrel Pistol, one locally made single barrel Pistol, six rounds of live cartridges, vandalized high tension electric cables, one saw blade and one knife from them “Preliminary investigation revealed that they are serial vandals, who have been terrorizing the community with other members of their gang, vandalizing most of the high tension cables and transformers thereby putting the community in total black out “The suspects have made useful statements, mentioning those who they do sell the items to, after vandalizing and efforts are on top gear to arrest both the buyers other members of the gang,” The Commissioner of Police, CP Mohammed Ahmed Barde, while commending the command’s operatives for a job well done, empathized with the people of Ugiri in Isiala Mbano Local Government Area of Imo State for the blackout they suffered in the hands of the vandals but assured them that the hoodlums will be made to face the full wrath of the law He also thanked the good people of Imo State for the cooperation and unalloyed support, they have been giving to the police, and urge them to always report any criminal activity/elements within their neighbourhood to the nearest police station or in time of distress call the Command’s emergency control numbers; 08034773600 or 08098880197. The post Two suspected serial vandals arrested in Imo appeared first on Linda Ikeji Blog.
Uncategorized