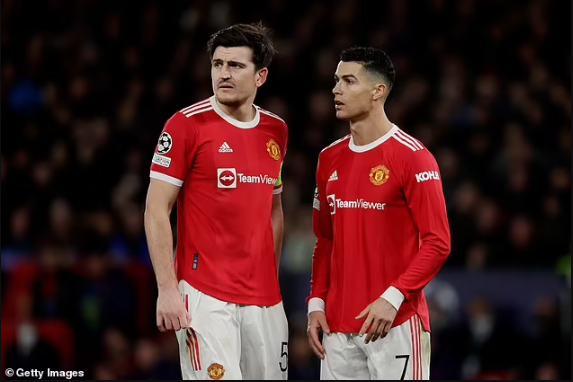 Cristiano Ronaldo reportedly called for Manchester United captain Harry Maguire to be dropped last season because he was “part of the problem”‘ at the club. The Portuguese striker returned to Old Trafford last season but failed to help the club avoid a sixth-place finish in the Premier League. Details have now emerged surrounding the Portuguese striker’s demands, from team selection to formation tweaks. According to the Athletic, Ronaldo was part of a group of players who went up to Rangnick at Carrington in February this year. Among them were Raphael Varane and Paul Pogba but Ronaldo’s message came through clearly when he said: ‘Maguire is part of the problem.’  Rangnick is said to have told the players including Ronaldo that it was ‘inappropriate’ to speak about Maguire when the player himself was not present.  A few players from the group subsequently apologised to the interim boss, who departed the club in the summer. Ronaldo also had a view on the team’s formation and during the impromptu meeting told the manager in no uncertain terms how he wanted them to set up. The 37-year-old wanted to play alongside Edinson Cavani up front but his pleas fell on deaf ears.  The report helps shed light on the summer of discontent at Old Trafford – which has largely been overshadowed by Ronaldo pushing to leave. Ironically, Maguire, who Ronaldo called to be dropped, has also been out of the team during their recent games with the striker only starting from the bench.  The post Cristiano Ronaldo called for captain Harry Maguire to be denoted and said he was part of the problem at Man United, new report reveals appeared first on Linda Ikeji Blog.
Uncategorized